Steven's debut album as a singer/songwriter. Steven has written 7 of the 10 songs on this album, includes the hit single 'Would He Believe' honoring the Elvis legacy. Recorded in Nashville, TN with the Imperials and Nashville's A+ studio musicians.

August 1. 2012 - Steven Kent spent the morning in Nashville giving a preview of his

Steven's debut album as a singer/songwriter. Steven has written 7 of the 10 songs on this album, includes the hit single 'Would He Believe' honoring the Elvis legacy. Recorded in Nashville, TN with the Imperials and Nashville's A+ studio musicians.

August 1. 2012 - Steven Kent spent the morning in Nashville giving a preview of his highly-anticipated new album, Dream & Believe, out August 8, 2012. Naming it one of his most personal pieces of work to date his debut as a singer/songwriter the 10 album track for the crowd at Funhouse Studios, Nashville, TN. Later he gave a powerful acoustic version of “Would He Believe” to an eager crowd on Beale Street in Memphis, TN

"It has even exceeded my expectations" "I would highly recommend, if you're an Elvis fan, or just a country rock music fan." "Steven is a very talented singer and songwriter." - Terry Blackwood - the Imperials

"You've got a great voice and great sound; I wish you all of God's blessings." - Bill Gaither - Gaither Music

"Steven Kent has a strong modern voice." says label president and award winning producer Dave Moody. "And his songwriting is very contemporary and commercial." Our staff was very impressed with his vocal range, as well as the songs he’s writing and feel he has what it takes to be successful." - Dave Moody President at Lamon Records

"You've made my job so easy! What we have here are 'Magic' tracks.' - Rodney, Ingles - Engineer and Mastering Funhouse Studios

You will discover this DREAM & BELIEVE album to be influenced by Elvis' belief that music has no genre boundaries. Steven has written songs the will touch your heart and soul and included a few covers that some say the KING would be very proud of, and may have recorded himself.

About Steven Kent: His first single “Would He Believe” debuted on country radio in the Netherlands July 2012 and was the #1 song for the month August and September 2012. Steven has recorded four prior albums; The Last Cowboy Song, For The Good Times, Steven Kent LIVE, along with a Christmas album.

Steven Kent who's smooth baritone voice can deliver songs with authenticity, is so much more than just a singer, songwriter. He has performed in theater, films, television, on radio and in concerts. In short, Steven is an all around versatile entertainer in every sense of the word. Over the years, Steven appeared on many stages, and has performed with many legendary entertainers; Johnny Cash, Eddie Rabbitt, Tanya Tucker, The Grateful Dead, Huey Lewis and the News, Merle Haggard, Jerry Lee Lewis, Tammy Wynette, Carl Perkins, to name a few.

An eclectic collection of great songs from the vast repertoire of Steven Kent recorded LIVE on stage.

Steven's passion for country really shows in his LIVE performances of some of his all time favorite songs.

The Last Cowboy Song album is a collection of favorite Western songs.

Steven sings with such soul, each song comes to life and takes you out on the range for pure cowboy enjoyment.

For the Good Times ...and Other Classics (Download Only)

Steven Kent sings the classics with his smooth baritone voice, this album is a favorite for country fans.

Cash & King November 3, 2019 Back by Popular Demand! In celebration of our 30th Anniversary, Spreckels Performing Arts Center has invited international recording artist Steven Kent back to the Spreckels stage with Cash & King, a unique concert featuring the music of Johnny Cash and Elvis Presley in one unforgettable concert. This is not an impersonator show Steven, along with his superb band, performs in their own exciting style while keeping true to the music that has inspired generations. This amazing 2-set show is packed with chart-topping classics, as well as Steven’s personal insight about the songs, and what it was like to meet these two legendary icons in person! Audiences all over the United States have been raving about CASH & KING. Come celebrate “The Man in Black” and “The King” in one unforgettable night…LIVE ON STAGE! All proceeds benefit Spreckels Performing Arts Center Tickets: $40/$30 To purchase tickets. Call 707-588-3400Online www.spreckelsonline.comBox Office Wednesday - Saturday 12 - 5pm or one hour before performances. Spreckels Performing Arts Center 5409 Snyder Lane Rohnert Park, CA 94928

Steven Kent LIVE will be kicking off Memorial Day weekend in his hometown of Healdsburg, CA in a special guest appearance during Coyote Sonoma's music series. An international country singer-songwriter, Steven Kent is currently touring a long-awaited dream of his, honoring and celebrating the music and lives of two of the most influential iconic legends in the popular music history Johnny Cash and Elvis Presley in CASH & KING: The Ultimate Celebration of the Legends to sold-out crowds in CA, OR, and AZ.

Tonight, Steven Kent will share the music of some of his all-time favorite songwriters and friends, Roy Orbison, Eddie Rabbitt, Kris Kristofferson, George Jones, David Alan Coe, Merle Haggard and more including his own off is song-writers debut album Dream & Believe. As many of you already know they are all his favorites! As Steven's passion for music and the legendary artist that he has been blessed to share the stage or special moments in time with truly are celebrations. This is a limited seating event so register early and bring your dancin' shoes or just sit back and enjoy a full night of some of the greatest music of all time, 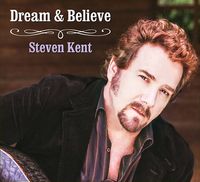